You like movies. Maybe you didn’t like history class. So, why should you be concerned with the history of movies?

Imagine your favourite meal laid out before you. You like the way it tastes. But what if you also knew about each ingredient and how it was prepared? You might appreciate it even more. The same is true when considering the history of film.

When you understand the journey that film has taken, from the ancient camera obscura to Frenchmen experimenting with photographic chemicals in the 1820s, to the immense industry Hollywood and its international counterparts have become today, movies become more than just an hour’s entertainment.

The following films each represented a step, small or large, in the history of film.

This short silent film opens to scholars, dressed in Renaissance academic attire, discussing a voyage from earth to the moon, as evidenced by a chalkboard drawing.

Next, they build the ship. The men board and the vessel is loaded into a large gun, to be shot toward the moon.

The moon itself bears the face of a man, and the rocket lands squarely in his eye.

After embarking, the voyagers discover a subterranean forest of giant mushrooms, inhabited by an acrobatic civilisation that vanish in a poof of smoke when assaulted.

The men attempt to make their escape from these aliens by pulling their ship from a precipice, to fall back to the earth. Will they survive to tell of their discoveries?

Most early film shorts were one-scene stand-alone “acts.” A Trip to the Moon was one of the first to string together a substantial number of scenes to tell a composite story. Though it may seem brief by modern standards, A Trip to the Moon took an entire reel of film – about fourteen minutes of footage, comprised of thirty distinct scenes.

This film was also influential as the first film to achieve international distribution. It may also be the first pirated film, as many of these were unofficial copies.

Finally, it  established fiction as the primary cinema product, rather than the “actualities,” or documentary shorts, that had come before it.

Armed men, cowboys, board and hijack a locomotive. They force the passengers from the train and confiscate their valuables. They make their escape, first by detaching the train’s engine, then on foot, and finally on horseback. Others are in hot pursuit – who will be victorious?

The film concludes – don’t worry, this really isn’t a spoiler – with a closeup of a gunman aiming at the audience and firing.

This film has been described at “the industry’s first spectacular box office success.” Investors were then ready to help establish permanent movie theatres.

The film was also revolutionary in terms of “temporal continuity” or “continuity of action.” It helped pioneer editing techniques such as parallel editing, rear projections, camera panning, and various camera angles.

Mr. Flip visits various establishments around town, including a general store, a bar, and a restaurant. At each, he flirts with a beautiful woman. Each time, she rejects his advances and claims painful or embarrassing revenge.

Mr. Flip illustrates the slapstick comedy that was popular at the time – a comedic element that would soon dominate silent film, and that is still in use today.

This film also contains the first instance of “pie in the face.” Think back to your childhood – is anything more classically funny than this?

Its short run time can also give you a taste of this genre – even if longer films might give you a headache.

Other slapstick comedies left an even more enduring mark on the cinematic psyche. You can explore this genre further with greats such as Laurel and Hardy, sometimes called the greatest duo in film history. They made over 100 films together, notably Sons of the Desert (1933) and Way Out West (1937).

Finally, not to be overlooked is “the greatest comic artist of the screen and one of the most important figures in motion-picture history,” Charlie Chaplin. Memorable films include The Tramp (1915), Easy Street (1917), and The Gold Rush (1925).

“An education in one day.” – Promotional Poster. 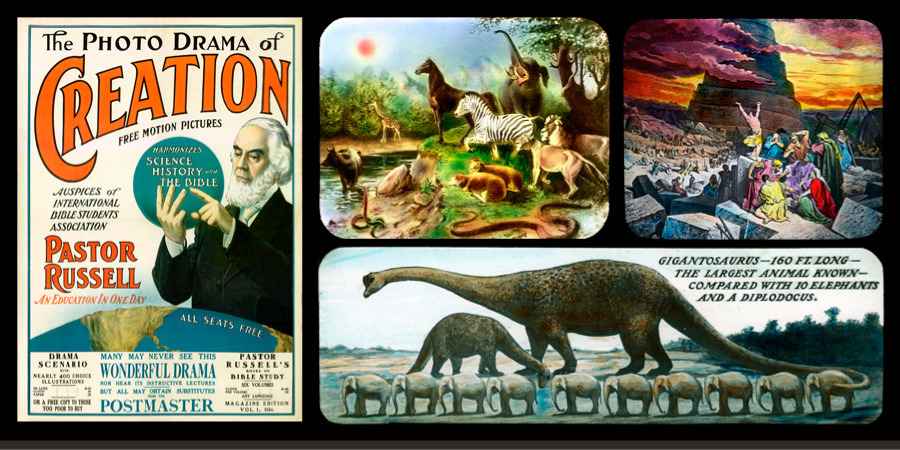 The Photo-Drama of Creation included black and white footage, hand-painted glass slides, time lapse photography, phonograph records of music and dialogue, and hand-painted motion picture film. Its purpose was to illustrate the story of the Bible, from beginning to end.

Totalling eight hours in length, exhibitors typically showed the film in four parts over the course of two or more days, with sessions lasting two hours each. Operators of the film manually synchronised the audio and video components; the record played when the filmed speaker’s mouth began to move.

What makes The Photo-Drama worthy of note? According to film historian Tim Dirks, it was “the first major screenplay which incorporated synchronised sound (recorded speech), moving film, and magic lantern colour slides.”

Twenty sets of the film, its ninety-six phonograph records, and countless stereopticon slides were produced, allowing the film to be shown in up to eighty cities each day. A shortened version of the film, called The Eureka Drama, was also produced.

The Photo-Drama was also the first “talkie” that many moviegoers had ever seen. In its first year in circulation, the film entertained nine million viewers across Europe, North America, Australia, and New Zealand. Translators produced the film in several languages, and versions of it were still in circulation at least through the 1930s.

Likely, though, you won’t be able to experience this film first for yourself, at least not in its entirety. You may find clips on the public domain. At time of publication, excerpts and copies of the original slides were on display at the historical museum located at the world headquarters of Jehovah’s Witnesses in Warwick, New York, U.S.A.

For five generations, Jack’s family have been singers at the synagogue. But Jack loves the ragtime band and jazz music of his time. After an argument with his father, Jack leaves home to pursue his musical career. He finds that he must make tough decisions to balance his music, his career, his heritage, and his romance.

According to some documentaries, The Jazz Singer is the movie that “killed the silent film.” The film’s trailer called itself “the first living Vitaphone announcement ever made,” and indeed it was one of the first times that the recorded voice – including singing – had been synchronised with a feature length commercial film.

The apparent discomfort of the announcer bears out the newness of the technology at that time. In 1996, the National Film Registry selected this movie for preservation due to its cultural and historical significance.

This film is also an example of the controversial “blackface.” It the film’s final scene, Jolson’s character applies pigment to his face and sings the song “My Mammy.” While the character sings to his own Jewish mother in the audience, the racial relations of that time period can be clearly observed.

Blackface was a common practice in theatre at the time – and the film was adapted from theatre – but today is widely considered to be racist. This, rather than its introduction of sound, is the focus of many film studies made on this film.

Interestingly, a comparison is drawn between the character’s Jewish heritage and the blackface he wears when he performs – a duality of two repressed minorities. Said Dr. Corin Willis of the Liverpool Screen School:

“In contrast to the racial jokes and innuendo brought out in its subsequent persistence in early sound film, blackface imagery in The Jazz Singer is at the core of the film’s central theme, an expressive and artistic exploration of the notion of duplicity and ethnic hybridity within American identity. Of the more than seventy examples of blackface in early sound film 1927–53 that I have viewed (including the nine blackface appearances Jolson subsequently made), The Jazz Singer is unique in that it is the only film where blackface is central to the narrative development and thematic expression.”

Based on the stage play by Langdon Mitchell, Becky Sharp is a historical drama set in the years after the battle of Waterloo in 1815. Becky (Miriam Hopkins) is a socially ambitious young woman of a low social echelon. She survives using her beauty and charm, attaching herself to a number of gentlemen. Her life becomes a rollercoaster of ups and downs, from the peak of high society to singing in beer halls for her supper.

Colour film was nothing new in 1935. In fact, prior to 1900, hand-painted film strips had presented audiences with motion pictures in “colour.” These, however, were seldom true to life, the product of an artist’s fancy. Film companies developed other colour processes, including the first version of technicolor in 1916. None could capture colour accurately, as seen by the human eye.

In 1935, Becky Sharp  became the first feature filmed entirely in Technicolor. Technicolor used a three strip process that resulted in highly saturated colour. Film would never be the same.

A cascade of Technicolor films followed, including The Wizard of Oz (1939), Gone With the Wind (1939), and Snow White and the Seven Dwarfs (1937). By the 1970s, colour film had become an almost exclusive production standard.

“Boy, have we got a vacation for you!”

Enter a world where your wildest dreams can come true. That’s the setting of Westworld – one of three themed amusement parks for grown-ups at futuristic resort. Sound like fun? It is, until the park’s androids start malfunctioning, with deadly results.

Westworld was the first film to use digital image processing – essentially, computerised special effects. Prior to this film, “trick photography” and “practical effects” were the primary types of special effects. This included camera angles, stop motion photography, models of larger objects, creative editing, and the like.  In Westworld, computers were used to animate certain scenes, such as the pixelisation that indicated the android’s point of view.

Interestingly, Westworld also serves as an example of the repeated use of certain storytelling elements. Westworld was written and directed by Michael Crichton, later the author of Jurassic Park. In both stories, an amusement park runs amuck, the amusements turning on the guests. In both stories, engineers in the control room try to remedy the situation by shutting down all power to the park. And in both stories, this simply makes makes matters worse.

This children’s film examines the secret life of toys. One toy has dreams of grandeur and the other is simply trying to get back home.

If you’re a millennial, you’ve almost certainly seen Toy Story already. Perhaps you even had all the lines memorised as a kid. But Toy Story finds its place in film history as the first fully computer animated (CGI, or Computer Generated Images) feature length film in theaters. (Yes, Veggie Tales predates Toy Story by two years, but it was a direct-to-video release). Today, almost every film contains some element of CGI.

The Future of the History of Film

Movies are no doubt still making history. In the U.S. alone, producers release about 600 films each year. You, as a moviegoer or film buff, are living the ongoing history of film.

Someday, film history classes will look back at the movies you saw on opening night. And you’ll have the pleasure of knowing the long journey the industry embarked upon in order to get there.

For more like this, read our article explaining the nature of genre films (and listing some goodies).

10 Actors who could be the next James Bond

Channel Awesome Controversy: What Will Happen Next?